Hey guys, we are continuing our experiment with open development. So far it's been a success! It's Monday, so as promised: another week, another alpha. Per tradition, it has been posted in the secret preorder forum.

- David made some improvements on the way the Phoenix Engine handles the sky and shadows. Look for blog posts featuring these soon.

- Massive progress on the multiplayer browser! Last week we announced that we reached a pretty big milestone in multiplayer, with the ability to join a server and chat with your buddies -- now we actually have a first stab at a UI for finding servers! For some reason, it is very pink right now. Don't judge: 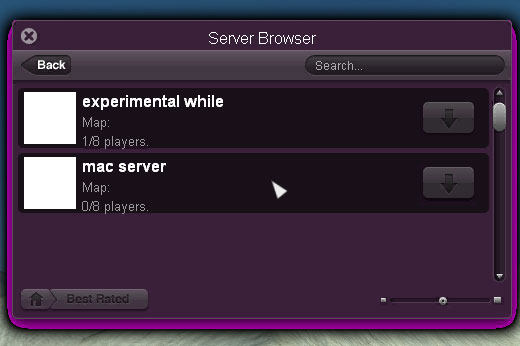 - Great improvements in the map editor. Phillip, John, and I made a kick ass level in LittleBigPlanet this weekend, which represents many hours of research on LBP's map editor. Expect to see a lot of LBP inspired features in the coming weeks. This week, Phillip continues to polish up the basics with the ability to select multiple objects at the same time and seamlessly copy things with the alt / option key. He also fixed a number of issues with the editor.

- Tooltips. Our tooltips are hot. They have a graceful fade in / out animation when your mouse moves over things.

- Some hot new art and models from Aubrey.

Finally, we are all testing Phillip's map editor tools and building little houses in the game for fun. Aubrey, our kick ass artist, is in the middle of some other stuff, so for this alpha, the default level is Phillip's "house". We are kind of having a competition between the programmers to see who can make the best house -- luckily, Phillip's looks kind of funny. Also, new rule, this counts as his final entry. 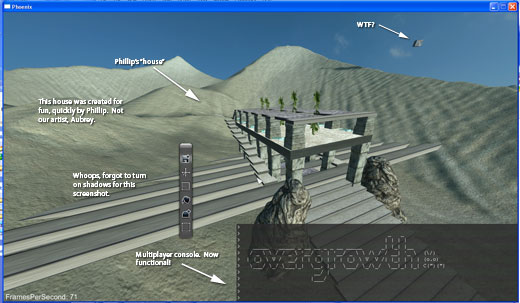 As always, see you guys in the Wolfire forums and in IRC.