Hi, for those of you who don't frequent the forum, you probably don't know me. I am Jeff, David's twin brother and I have recently started working on Lugaru 2. I'll be updating my progress here and on the forums as is custom. On to the meat of my first blog post:

As you might have noticed from playing other 3d games, their in-game user interfaces are often quite lacking. In fact, many of them were not even designed to be used on a PC and their interface is just slapped on to allow the game to be started. Mouse wheels don't work, you can't select or copy text, you can't tab between editfields, basically, nothing quite behaves the way you're accustomed to. Well, that is understandable, since no one is crazy enough to invest the time in emulating a complete, modern windowing system, right? Not anymore because that is exactly what is going to be in Lugaru 2!

The goal behind "PhoenixUI" is to have interface elements that behave exactly like your operating system. That is, you'll be able to press tab to switch between controls, double click a word to select it, have multiple redo/undo states in text fields, and so on. This way when you are creating a map in the map editor, typing in the chatroom before a multiplayer game begins, or using the extensive wolfireNET feature to download maps and mods or check rankings and such (more on this in another post someday), you won't have to fight the interface to get it to do what you want it to.

So please try out this prototype of PhoenixUI and let me know if you find anything that doesn't behave properly according to Mac OS X's interface. A few things to note: if this runs slow on your computer, don't worry. When it is implemented inside of Lugaru 2, it will barely use any CPU time - this is just a prototype. Also, the OS X theme is temporary and will be changed to an original theme to avoid the wrath of Apple legal. 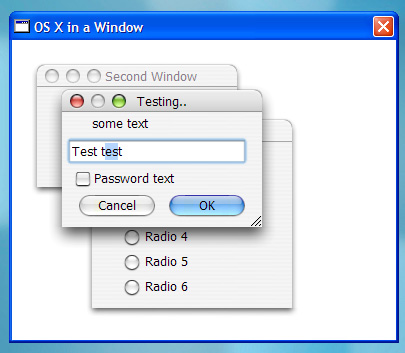